Search
A blog about photography from

I walked into the studio a couple of weeks ago to find that my colleague had constructed a kind of cubicle from dark background cloth, which he had used to shoot some video for a musician friend. I was pretty intrigued by it (and the way you sound when stood inside it – no echo at all) and really wanted to shoot some gungy looking portraits using it as an alcove. 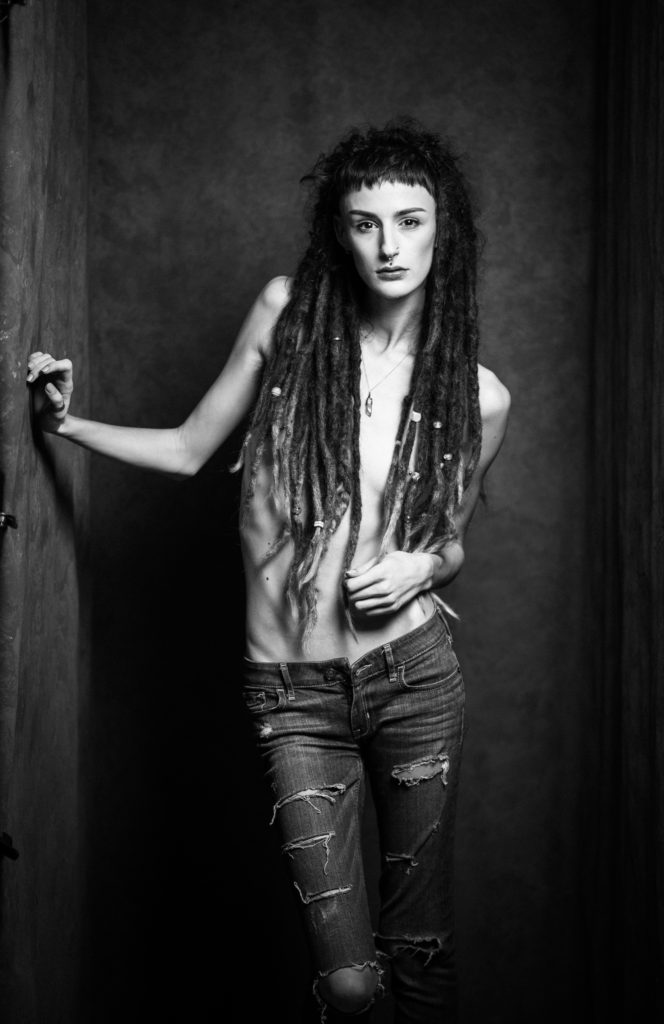 The inspirational Irving Penn used to shoot people in a ‘corner’ he constructed in his studio using two pieces of background plywood, once saying: “this confinement, surprisingly seemed to comfort people, soothing them. The walls were a surface to lean on or push against.” Maybe the walls of the alcove would serve the same purpose?

I phoned a model who I’ve enjoyed working with in the past for her alternative look and fantastic engagement with the camera. Jess, who goes by the professional name of Amanita Storm, has amazing confidence in front of the camera, and knew exactly what I was trying to do. Inside a couple of hours we’d got everything we wanted as well as trying a few experiments with different lighting arrangements. Some worked; some didn’t.

In the end I favoured just one light, fitted with a softbox and used up close to give some fall-off. I varied its position of the light so that I wasn’t lighting too much of the background, just a little bit so you can make out some texture there. I also used the flashes on very low power, so I could shoot with a wide aperture on my 85mm lens.

The agony came in post-production when I tried to work out the look and feel of the pictures. I imagined them in black & white form the outset, and indeed they look great after some conversion in Google Silver Efex Pro 2. But I also worked up a few colour examples, and surprisingly love them to bits. Which I like best is probably a decision to come back to in a couple of weeks. Let me know what you think in the comments below…?

It’s a good time to be a film photographer. A few weeks ago, Kodak announced they’re bringing Ektachrome back from the grave and are looking into doing the same with Kodachrome. Then we have a brand new black & white ISO 400 film from Bergger, which uses both silver bromide and iodide for extra dynamic range and is available in lots of different formats.

I like film photography, and still keep a handful of film cameras on the go.

I’ve been photographing female fellows at Christ’s College, Cambridge, for a couple of years now, and Dr Sophie Read was my last commission in the series. It’s been a massive honour to shoot this set of pictures – fascinating people in wonderful surroundings. What’s not to like?